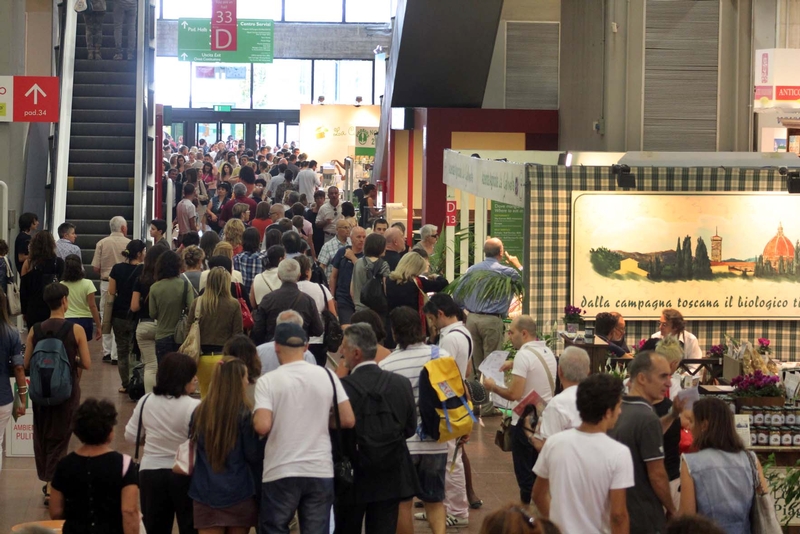 FROM EXPO TO SANA
With the organization of the Organic Pavilion and Biodiversity Park at EXPO, Sana and BolognaFiere underline the exhibition’s role as the international platform for Italian organics

EXPO saw the creation of the International Forum of Italian Organics promoted by the Ministry of Agriculture, Associations from the sector, BolognaFiere
SANA 2015 is a hugely expanded edition: +25% exhibitors +40% foreign buyers

Four days dedicated to the world of the natural and organic, the innovative and sustainable agriculture of the future, and an approach that safeguards biodiversity: from Saturday 12th to Tuesday 15th September SANA 2015 will bring the International debate on nutrition, food and sustainability directly to Bologna from the Natural and Organic Pavilion at Biodiversity Park, the themed area of EXPO 2015 dedicated to biodiversity and organic agriculture, that BolognaFiere has created and managed, transforming it into a genuine international showcase for Natural and Organic products.

In year of EXPO Milan 2015 and against the backdrop of BolognaFiere’s successful organization at EXPO of the Organic Pavilion and Biodiversity Park, SANA 2015 promises to be an exceptional edition with a boom in exhibitors with 25% more than last year (700 in total).

There is also a significant increase in the number of international buyers, with 45% more than the previous edition, generating over 4000 B2B meetings that will take place at the Buyer’s Lounge that BolognaFiere has reserved for exhibiting companies to meet with delegations from 21 countries including: Australia, Austria, Belgium, China, France, Germany, Denmark, Poland, Croatia, Slovenia, Hungary, Japan, Holland, Sweden, Great Britain, Russia and the USA.

An impressive international presence thanks to the different projects created in cooperation with the Ministry of Economic Development, ICE, the Emilia Romagna Regional Administration, Unioncamere and FederBio, in addition to the Project for the promotion of Italy’s organic and natural food and cosmetics sector to the South Korean market, promoted by MiSE and in cooperation with Federalimentare and FederBio, in addition to SANA’s internationalization project made to coincide with EXPO Milan 2015 promoted in cooperation with the Emilia Romagna Regional administration. So far SANA has accepted the preregistration of over 20,000 operators: this represents an increase of 15% compared with the previous edition.

SANA 2015 will also represent a key step in the debate on the future of agriculture and nutrition that began at EXPO with the Milan Charter.

FROM BIODIVERSITY PARK AT EXPO TO SANA 2015

At Biodiversity Park BolognaFiere also created the “Earth Theatre” to host a schedule of meetings and promoted events entitled “RIGHTS OF THE EARTH and RIGHTS TO THE EARTH”. The location was at the heart of the debates and discussions at EXPO; already hosting over 80 meetings so far and due to have hosted 120 by the end of EXPO.

The Park was inaugurated by Vandana Shiva and Laura Boldrini, President of the Chamber of Deputies, who described the location as one of the most important at EXPO; its importance was also acknowledged by Commissioners and Ministries of Agriculture from the many guest countries, all of whom were keen to recognise the message the park brought to EXPO.

The Earth Theatre was also selected to host one of the most moving ceremonies to take place at EXPO, the meeting between the representatives of the main religions which, using their own liturgies and languages, performed a blessing ceremony and an offering of food.

At Biodiversity Park and the Organic Pavilion, MIPAF together with the associations from the sector and BolognaFiere, made up the International Forum of Organics to carry out numerous important meetings and debates to move forward the proposals included in the Milan Charter. This work will continue to provide results until the end of EXPO.

From the 3rd to 5th of September ORGANIC WEEK will be held, thanks to an agreement that involves also the Nuremburg Exhibition Centre, the organizer of BIOFACH, the leading international fair event for the organic sector and IFOAM, the leading global association dedicated to organics.

On the 12th, September, the opening day of SANA, the Deputy Minister, responsible for organics, Andrea Olivero, will present the new Strategic Plan for the development of Organics in Italy based on the contributions that have emerged from the International Forum at EXPO.

SANA will also play host to the conclusive sitting of the IFOAM International Conference, AGRIOBIO Mediterraneo, which will begin on Friday 11th September in Vignola (Modena) and which will bring together the main realities of the Mediterranean area, to work towards the creation of an integrated development project for the Mediterranean countries.

The Ministry of the Environment, present at Biodiversity Park at EXPO through the promotion of Italy’s protected areas and Parks (a key visitor destination for school trips to EXPO) held at Biodiversity Park along with many other initiatives, also held the European Environment Conference, which was attended by Minister Galletti and the European Commissioner Karmenu Vella.

“From EXPO to SANA and from SANA to EXPO is the pathway for Italian and international natural and organic products during the year of the Universal Exhibition,” underlines Duccio Campagnoli, President of BolognaFiere, “Playing a leading role at EXPO 2015 has been, for SANA and BolognaFiere and for all of the sector of organic and natural products, an important opportunity to underline the strategic role that this sector plays in Italy and abroad, positioning sustainable agriculture and natural and organic production at the centre of the overall debate. The 2015 edition of SANA has an extremely relevant role for all firms, operators and visitors because during these intense days we will see the finalization of the contributions that emerge from the International Organic Forum and the Milan Charter, the document that EXPO will leave as a legacy to the future generations. In the documents that represent the soul of EXPO, organic will play a key role. This is because organic agriculture that safeguards the fertility of the earth, the environment, biodiversity and local economies represents a model capable of meeting the challenge of “Feeding the Planet, Energy for Life”.